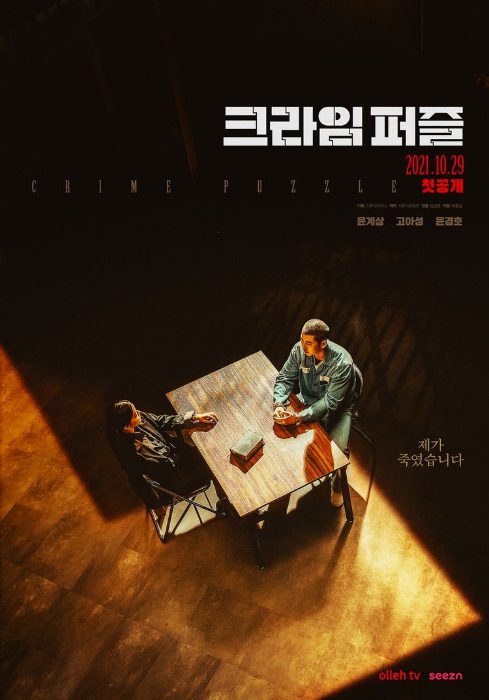 Yoon Kye-sang plays Han Sung-min, a distinguished criminal psychologist. He upends his own life by confessing to a murder, but when he’s imprisoned it becomes clear that he has a secret motive for wanting to land behind bars. Go Ah-sung plays Yoo-hee, Han Sung-min’s former girlfriend and current lead police investigator on his case. Last but not least, Yoon Kyung-ho plays Kim Pan-ho, who is a fellow detective.

The teaser begins with Yoo-hee and Kim Pan-ho looking around Han Sung-min’s room to search for clues. Yoon Kye-sang says in his voiceover: “No matter how much you want to refute this, there’s no use. The evidence is perfect.” Kim Pan-ho yells at Han Sung-min, asking why he left the evidence. They find a murder board.

Copy onscreen says: “A criminal psychology scholar who confessed to murder.” We see Han Sung-min in the prison having numerous violent encounters. In his voiceover, he offers a hundred million won per month if someone will protect him so he doesn’t die in prison. Copy continues: “His true plan begins now.”

Staring at the murder board, Yoo-hee sees that: “Everything is connected to Professor Han.” Kim Pan-ho then realizes that everything is moving according to Han Sung-min’s plan. The last shot shows Han Sung-min on the top floor of the prison, surveying it like a king.

Crime Puzzle is a collaboration between Olleh TV and seezn, two VOD and streaming platforms based in Korea. Directed by Kim Sang-hoon (Tell Me What You Saw) and written by Choi Jong-gil (Warriors of the Dawn) it premieres in Korea on October 29.