For many fans, K-Pop can be something that gets them through the hard times and is a source of comfort. This applies to the K-Pop idols themselves as well.  Many idols are very friendly and talk openly about their own emotions in a way that seems like you are talking to a friend.

Which kpop idols are your comfort idol/s? When you see or hear them you just know everything is gonna be okay. Here’s mine : #HONGJOONG #BangChan #ATEEZ #StrayKids #staytiny #ATINY pic.twitter.com/0f0BQLs33b

During one of ATEEZ‘s “Guerilla” comeback fan-calls, a fan took the opportunity to share with Wooyoung how they felt that the group had saved their life during a hard time. Idols often hear words like this and are told they are a source of happiness for their fans, so this was not out of the ordinary at first. The fan then used a QR code to share a letter written in Korean that Wooyoung was able to read right then and there.

The letter went into detail about the horrific things the fan had experienced including depictions of abuse some might find triggering. 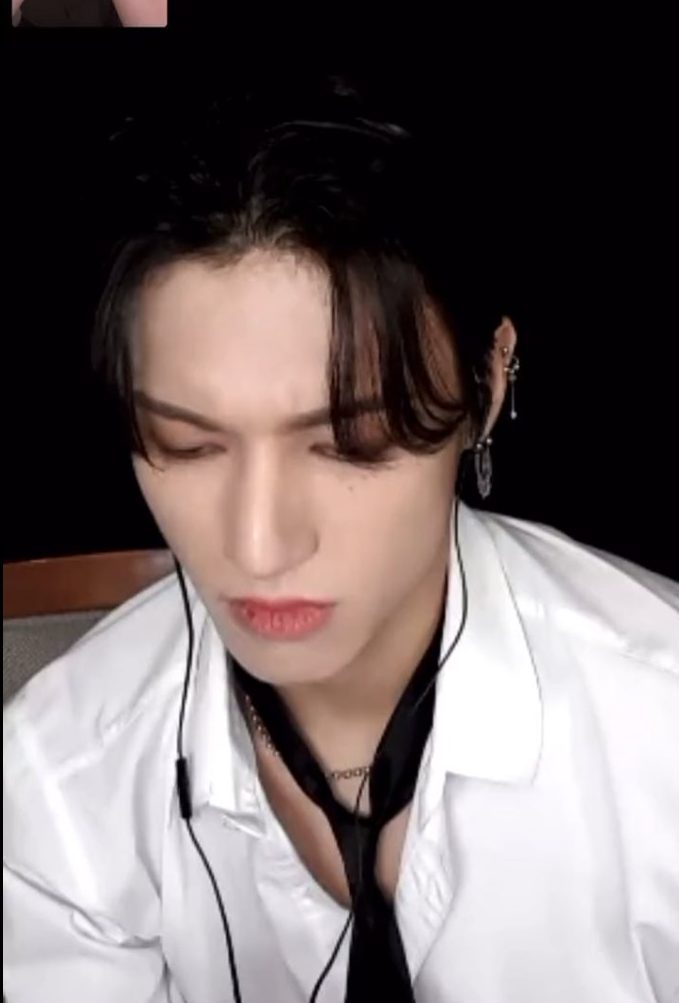 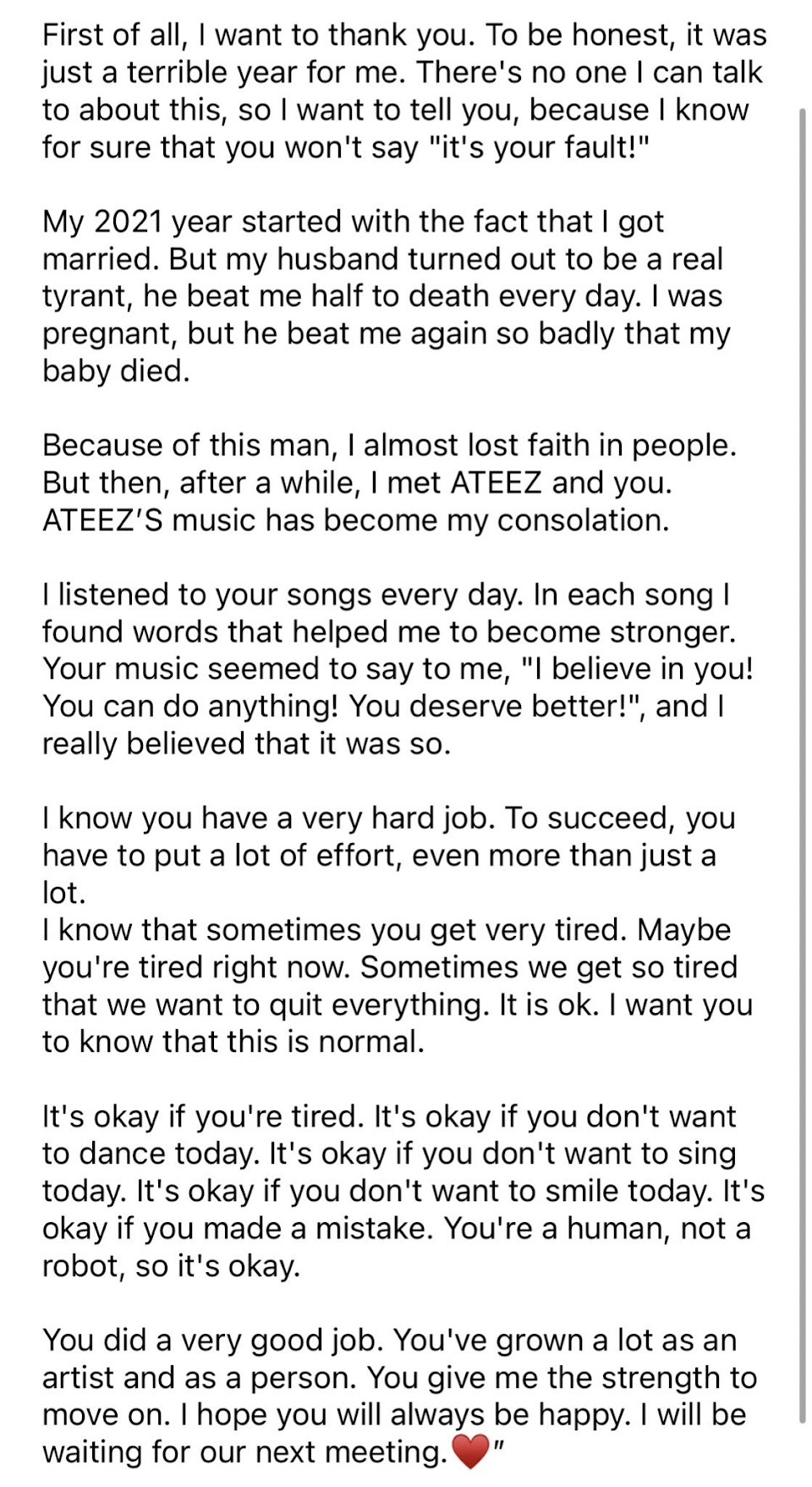 While it is truly awful that the fan went through these things, many netizens began discussing whether or not it is appropriate to “trauma dump” on idols. Trauma Dumping is a phrase that describes sharing traumatic experiences with an unsuspecting person without permission, often at inappropriate times and places. Fans say that this is exactly what happened to Wooyoung in this circumstance. 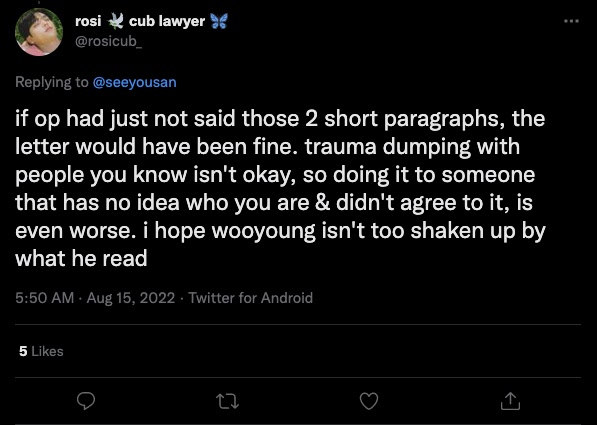 wooyoung or any other member from ateez is not your personal dumping ground for your trauma. they don’t get paid by the hour to hear you talking about stuff like that. you should be making the little time you have with them a positive moment for you AND them.

This is not the first time trauma dumping on idols has been discussed. Many STAYs have talked about the way that viewers will suddenly unload about their lives during Stray Kids Bang Chan‘s live streams. These topics have ranged from deaths in viewers’ families to users asking how to deal with self-harm.

While Bang Chan is known to be one of the most comforting and relatable idols and has said he doesn’t mind fans using him for comfort, many think that it’s not right to use him as what they call a “stand-in for therapy.” Fans also think that idols are not meant to fill this sort of role in someone’s life outside of entertainment.

but also go to a professional instead of dumping all of your trauma on chan during vlives pls pic.twitter.com/VGZri6msp6

someone needs to have a serious talk with chan and explain to him that he’s no one’s therapist cause like.. he’s literally telling us to trauma dump on him like this is very upsetting and he’s always done that 🙁

chan is nobody’s therapist he’s not someone to dump our trauma and stress on. yes he did offer that but that doesnt mean we should treat him like our personal therapist. he goes out of his way to make sure he’s reliable and we feel safe but please remember that he’s human too

A side effect of trauma dumping on someone many fans worry about is that hearing about someone’s trauma can often trigger your own or cause negative feelings that make a lasting impression. Idols have been open about experiencing depression and dealing with their own issues, so the assumption can be made that repeated instances of trauma dumping can make an idol’s mental health worse.

not to mention you NEVER know what these idols go through behind the scenes and at any point if anything in that message could’ve been a trigger to someone else too (not saying it was but just saying for any idol it could’ve been possible). ppl gotta stop trauma dumping on celebs https://t.co/S3bsmyHQcY 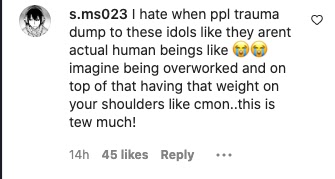 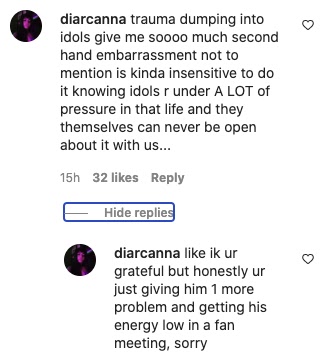 The reason why some fans may feel like they are able to trauma dump and share extremely personal details with idols is because of the way that idol-fan relationships can feel much closer and more personal than they really are. These fans forget that they are a stranger to the idol because of the one-sided bonds that can form with K-pop groups.

In spite of this, many mental health professionals believe that trauma dumping is something that should not be done without permission even between close friends.

ppl act like these idols are their best friends, but in reality, we know nothing about them. a fancall is not the place to trauma dump or act inappropriate towards the idol.

“Don’t trauma dump on idols who are basically strangers” and “I wish OP gets the help they deserve” are two things that can coexist. Nobody wishes harm on OP and trauma dumping is what it is, don’t downplay it to sound like a noble martyr.

this is a reminder that idols are not your therapists they do not want you to dump your trauma on them. please respect these people i’m so tired of seeing weird shit everyday

Fans suggest that instead of using idols to cope with the trauma you may be going through, to instead seek out professional help and keep their experiences with their idols positive so as to not add to their already full plates. Telling an idol that their music made an impact on your life is something that is still encouraged, just not in the great detail fans sometimes go into during their meet & greets and fan-calls.