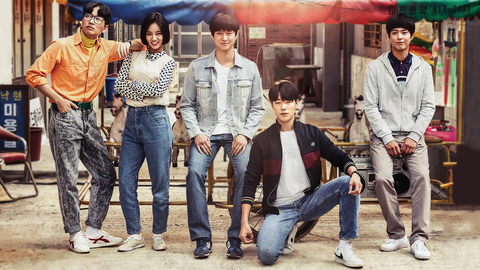 It’s hard to say exactly when this drama stole my jaded middle aged heart, but it surely wasn’t long before I found myself completely invested in the lives of each vibrant member of the Reply 1988 cast. Revolving around a group of families who quite literally live on top of one another in a small dirt alley in Seoul, the story ebbs and flows around various lead characters, and the warmth shared in their everyday struggles is sure to stir the emotions of even the most cynical of viewers.

The characters come to life in a bright pastel hued Seoul in year 1988, right before the much anticipated Olympic games. The excitement and optimism are palpable and the attention to detail paid to the 80’s set and costumes is a feast for the eyes.

Each of Reply 1988’s episodes is jam packed with satisfying stories that somehow finds the perfect balance of humor, heartbreak, drama, and action. The show’s unhurried pace does not feel dragged out and in fact feels like the right length to do justice to painting a complete picture of the unfolding relationships. Here are 10 things I loved about both the drama and the characters of Reply 1988:

The drama follows a group of friends, four boys and a girl, who have been best friends in the neighborhood since they were toddlers. They are now in their late teens but not much has changed in their friendship. They are inseparable, constantly over each other’s homes and ragging on each other about every little thing that happens in their lives.

In the lead character of Sung Deok Sun, K Pop star Hye Ri does an impressive job playing a spitfire, street-smart tomboy. Deok Sun narrates the story as a 40-something adult who is reminiscing about the past. She is now married but it is a mystery whom she eventually married, creating one of the plot twists to be discovered later in the drama.

The drama takes place in a real neighborhood in Seoul called Ssangmun Dong, and among the many wonderful themes in this drama, the strongest might be the genuine warmth and caring among this group of five families.

The neighborhood is a mix of new neighbors and a bunch of old friends from the southeastern coast of Korea who speak in the down home colorful and oftentimes hilarious dialect of Kyungsang province. Mixed in with the adults are their city bred kids, and there are many family, friend, and love relationships thoughtfully rendered throughout the drama.

It is this feeling of neighborly love and caring that many people miss most in modern Korea and more than any specific character, it is in fact the neighborhood that steals the show.

Before going any further, we must give well deserved credit to the OST because the Reply 1988 Original Soundtrack is almost as good as the drama itself! If you came of age anytime around the 80’s, or are a fan of vintage Korean music, you will love the music you hear throughout this drama. One retro mega hit song follows another, transporting you body and soul back to the 80’s.

A mix of original artists and covers by contemporary artists, the playlist might be the biggest payoff of watching this series, and you will surely be listening to it long after the drama is over.

Here’s a link to the songs, in case you’d like to listen to it right now as I am doing.

Right away in episode 1, there is a lot of wonderful Korean food. Food prep, food talk, food consumption, and most of all food sharing. It’s a given that each ajumma has a ‘big hand’, a Korean reference to people who can’t help but always make generous and ample amounts of food. The poorest share with the richest and vice versa, and it’s the rare dish that is made without an extra helping being sent over to a neighbor’s home.

Dishes of course are never returned empty and an alternate name for the drama might as well be “kitchens without borders”! It is the Korean way and no one goes hungry in Ssangmun Dong, although you might find yourself hungry while watching Reply 1988.

Loud, brash and tightly permed, ajummas are out in full force in Reply 1988. From financial hardships to menopause to problems with their husbands and kids, there is no challenge that the sisterhood of the Ssangmun Dong ajummas don’t tackle together.

The portable outdoor deck is an essential piece of Korean furniture dating back hundreds of years, and on it the ajummas are often seen chatting while trimming vegetables and heckling the husbands who walk by. These ladies rule the roost in Reply 1988 and the ajumma sisterhood so unique to Korea is beautifully and hilariously portrayed by the ladies of Ssangmun Dong.

The heartbreaking realities of the working poor is an important theme in Reply 1988, and Deok Sun’s family lives in the kind of half basement home made famous in Bong Joon Ho’s Parasite. It’s a tricky thing to be so close to someone who has so much more than you especially if they are your landlord and friends. But unlike the toxic juxtaposition of the rich against the poor in Parasite, the haves and have nots here live together and care for one another in a way that no one feels overly resentful of another.

Succeeding in the cut-throat world of academics is a constant pressure in Korea and, by definition, only a handful can win in this game. The majority of kids who are not at the top of their ranked class are then forced to choose from a limited number of options as to career and income, resulting in a vicious cycle of discontent that continues to plague Korean society.

Reply 1988‘s cast of characters is an exaggerated mix of top students and worst students but some worthy lessons are learned about how street smarts often trump book smarts in the game of life.

The best of intentions don’t always result in a happy blended family, which the Korean society has not embraced historically. The complications of loss and feelings of betrayal for embracing a new parent are not easy for even the most mature human being. This theme is explored with a sensitivity and understanding that is as heartbreaking as it is heartwarming. There are no shortcuts and it is only through patience, time, and a village of kind cheerleaders that a happy new family is able to somehow meld together.

Though it is said that all is fair in love and war, not so in Ssangmun Dong. Feelings run deep both for friends and lovers and though you may not agree with all the choices made by the characters, you can’t help but admire the sacrifices some of them make for the sake of “euri” (a power Korean word that combines friendship, deep loyalty and a sense of doing the right thing).

10. Insight into the Rise of the Korean Economy

Although it is not a key theme in the drama, Reply 1988 gives you an insight into the Koreans who in the 80’s turned a small little country in Asian into the 11th largest economy in the world today. Each character in this drama reflects the penny-pinching, scrappy and creative traits that Koreans admire and value so and still live by.

Each purchase and use (and reuse) of clothing, electronics and food is carefully and frugally considered and debated not only within the family but also between families. These traits and values drove the excitement and optimism of the growing Korean economy in 1980’s, which led to hosting the Olympics in 1988, and we have a lot to learn from the Reply 1988 cast – even today.

Reply 1988 (or Answer Me 1988 in some countries) is a funny, poignant, and authentic drama that is a must watch for fans of Korean culture. This 20 part series marked the third collaboration between director Shin Won-ho and screenwriter Lee Woo-Jung as the final series of a multi part project, each one focusing on a different year of the 80’s and 90’s. All three were popular with audiences all over the world but Reply 1988 was the most popular, winning many awards and currently ranked as the fourth highest rated drama in Korean cable television history.

There is one last thing we should address so that no one is unduly turned off before getting immersed in this terrific drama. Suffice to say that there are some strange goat bleating sound effects peppered throughout the drama for comic effect that viewers may or may not find to be an unfortunate distraction. If you can ignore this minor annoyance, you will be rewarded with one of the most charming, nostalgic, tear-jerking, heartwarming stories you’ve watched in a long time. The chemistry of the Reply 1988 cast is pure magic.

In the wise words of our narrator Sung Deok Sun: “Time will always pass. Everything will pass by. Everything will age. That might be why youth is beautiful. It shines, blindingly bright, for just an instant.”