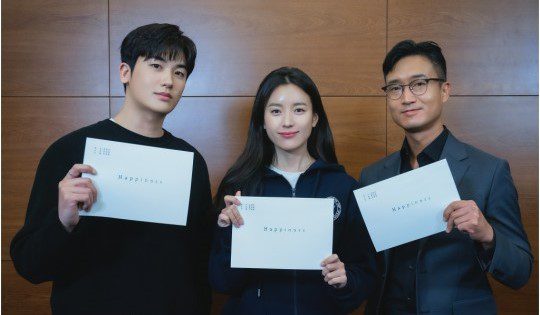 The first script reading for tvN’s upcoming thriller Happiness recently took place, and stills of the cast and crew have been released.

The drama stars Park Hyung-shik (Suits), Han Hyo-joo (W-Two Worlds), and Jo Woo-jin (Seobok, Mr. Sunshine) in a story that’s set in a near apocalyptic future. A new infectious disease has been discovered in an apartment complex, and the building is sealed off from the rest of the city. Separated by floors and their individual units, and isolated from the rest of the city, tensions and anxieties rise as the residents grow suspicious of one another and try to fight for their own survival.

Han Hyo-joo takes on the role of the courageous and quick-thinking police officer Yoon Sae-bom. She’s a member of the SWAT team, and easily adapts to the ever-changing circumstances when out in the field.

Park Hyung-shik plays a police detective in the violent crimes unit, Jung Yi-hyun. He has a strong sense of duty and responsibility, and prioritizes protecting the public at all costs — even if it means making personal sacrifices. Strong but also gentle in spirit, he has been friends with Han Hyo-joo since high school.

Jo Woo-jin’s character is lieutenant colonel Han Tae-seok, the charismatic head of medical command. He is tasked with a secret mission: to uncover the origins of the infectious disease.

Residents of the building include Bae Hae-sun (The Great Shaman Ga Doo-shim), Park Hee-bon (Unfamiliar Family), and Kim Young-woong (Vincenzo), among others.

Directed and written by the duo who created Watcher — PD Ahn Gil-ho (Forest of Secrets) and writer Han Sang-woon (The Good Wife) — Happiness is currently set to premiere in November on both tvN and TVING. 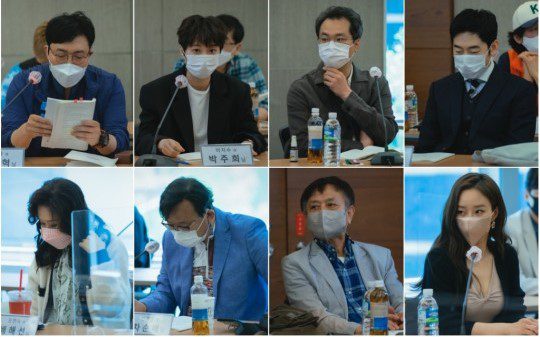