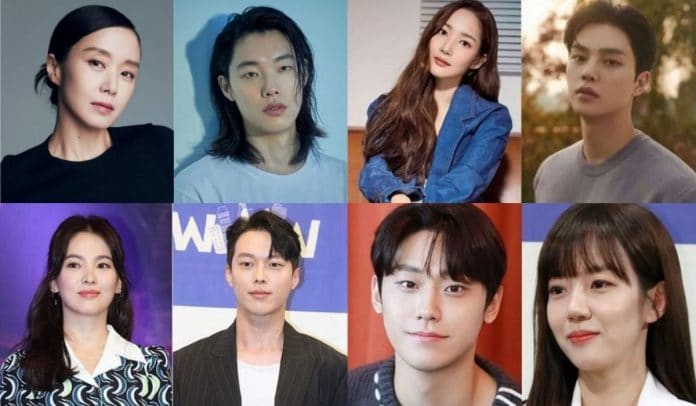 While its typically normal for an older Korean male actor to be paired with a younger female actress, its not that often we see the opposite and even so, the age gaps aren’t usually that big.

There appears to be a shift in kdramaland, its something that we’ll soon notice as there is an influx of upcoming 2021 kdramas about noona romance.

Various online communities have brought up four highly anticipated kdramas that have cast/ are in the process of casting older women with younger men and the age gaps are 10 years or more.

Starting with “No longer human,” veteran actress Jeon Do Yeon (born in 1973) is paired with actor Ryu Joon Yeol (born in 1986). They have a 13 years gap. Their upcoming drama shall tell the story of ordinary people who suddenly realized that nothing has been done in their life. Its a story about a woman who goes through the stages of denial and a man who runs fearlessly towards the end of his youth.

Another highly anticipated noona romance could possibly pair actress Park Min Young (born in 1986) and actor Song Kang (born in 1994). Song Kang is one of the young rising talents, he’s been very busy this year. Both actors are in talks for this upcoming drama. The drama titled “Company Love Atrocities” is an office melodrama that depicts work and the love lives of people working in the Korean Meteorological Administration.

And whats considered to be the comeback of the queen of romance dramas, Song Hye Kyo (born in 1981) will be paired with actor Jang Ki Yong (born in 1992). The upcoming drama “Now, We Are Breaking Up” is also a romance drama that focuses on the separation of love. Its been reported that the drama has already begun filming and is slated to premiere in the latter half of 2021.

And while the cast of this upcoming drama isn’t confirmed yet, if confirmed, this potential on-screen couple will likely be among the biggest age gaps between two kdrama stars in a project.

Actress Lim Soo Jung (born in 1979) is in talks along with actor Lee Do Hyun (born in 1995) for an upcoming drama about a scandal that causes chaos at a Gangnam high school.

And another potential on-screen couple might be Seo Hyun Jin (born in 1985) and the rising talent Kim Young Dae (Born in 1996). Seo Hyun Jin has recently confirmed for the drama titled “Why Oh Soo Jae,” while Kim Young Dae is still in talks.

Which one of these upcoming 2021 kdramas about noona romance are you most excited to see?