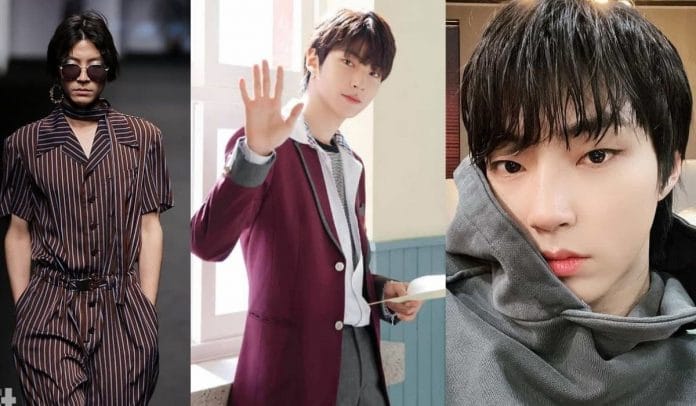 Hwang In Yeop is the talk of town in kdramaland, the rising rookie actor has gained a lot of new fans for his portrayal of the cool Han Seo Jun in the popular tvN drama “True Beauty,” and since he’s a new face, many became curious about him and his background.

Today, we’re here to talk about Hwang In Yeop  and mention 9 interesting facts about the rising actor that you probably haven’t heard of yet.

Usually, Korean actors begin their journey at a young age, at around their late teens or early twenties, but every once and a while, you’d see actors start out later than expected to the game, Hwang In Yeop is one of them.

Hwang In Yeop is currently 30 years old, he’s began acting recently and he started out in his late twenties, many fans are shocked to find out about Hwang In Yeop’s age since he looks so young in real life.

Hwang In Yeop’s first entry to the showbiz wasn’t through acting but rather modeling, he’s known for his great body proportions and in 2018 walked the runway for Royal Rare, CINNU HOMME and more.

After that, he transitioned into acting and now he’s made it this far.

Worry not new fans, you won’t have to say goodbye to Hwang In Yeop any time soon. The beloved rising actor has already completed his military service in the past.

Hwang In Yeop went above and beyond in his preparation for the role of Han Seo Jun in “True Beauty.”

In a recent interview, he’s revealed that he’s gotten a motorcycle license despite never having ridden one in his life before solely for the role of Han Seo Jun, he’s also went to action school so he could portray the action scenes in the drama better.

6Hwang In Yeop studied in the Philippines

Hwang In Yeop used to be an international student, he graduated from Nikkei Jin Kai International School (2008-2009) in Davao, Philippines and his English name while living in The Philippines was Ryan Leon.

7Hwang In Yeop is very introverted

In an interview with VOGUE, he admitted to being very introverted and despite having dreamt of becoming a model and actor at the same time, it took him a lot to get out of his comfort zone, he said,

“As I modeled, I gained confidence, and I chased my dream of becoming an actor.”

Hwang In Yeop was previously asked about a drama that has made a deep impression on him, he picked IU’s “My Ahjussi,” which is considered one of the most critically acclaimed kdramas that aired on tvN.

9He used to be under YG KPLUS

Contrary to popular belief, YG is more than an idol’s agency, it also houses many well-known and rising actors, one of its subsidiaries is also known to have been the start point of some great actors. Hwang In Yeop used to be part of YG KPLUS, but he has left it and he’s known part of the huge actor’s label KeyEast Entertainment which houses many actors such as Kang Han Na, Ju Ji Hoon, Kim Dong Wook, Woo Do Hwan and Moon Ga Young.

So this was your crash course on everything you need to know about Hwang In Yeop, which one of these facts surprised you the most? Let us know your thoughts in the comment section below.