The Most Disappointing Korean Dramas Of 2020 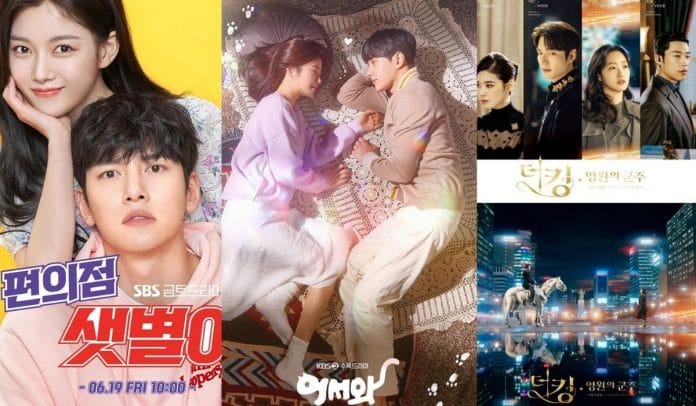 The Most Disappointing Korean Dramas Of 2020

2020 was a good year for Korean dramas, generally speaking, I’ve listed 12 of what I believe to be the best kdramas of this year, 12 is a lot of dramas, I was surprised and happy with a lot of works this year which set the bar pretty high for whats considered good, okay and disappointing.

So today, I am taking a look at my personal picks for the most disappointing kdramas of 2020.

Note 1: the below list doesn’t include any kdrama above 20 episodes, and may contain spoilers from the said dramas. This article is a personal opinion, so take it with a grain of salt.

Note 2: Disappointing doesn’t mean awful/bad necessairly, but it means that I had higher expectations of the said dramas and was shocked by how the results came out, hence I was ‘disappointed.’

A drama about a man who’s secretly a cat, how wrong can it go?

I dont know if it could/should be called beastiality but the drama was such a turnoff. It features many uncomfortable scenes. I just didn’t know how to feel about it, should it be taken seriously or lightly? If seriously, then I am disgusted, if lightly, then its been done wrong. I would have preferred it to have focused on friendship rather than love and a romantic relationship. Kim Myung Soo’s choice here was definitely odd considering how seriously he’s been taking his acting career.

2When I Was Most Beautiful

“When I Was Most Beautiful” was set up for failure since episode 1, it features a love triangle between two brothers who fight over one woman, that woman ends up marrying the older brother.

The theme was uncomfortable from the get-go, you know their actions are morally wrong and the way they go about it enforces that idea in your head. Pinning two brothers against each other is already cheesy and has been done too many times already but the added tension here is that one brother actually ends up marrying the girl while his younger brother still harbors feelings for her.

Not only weird but very difficult to understand, I couldn’t wrap my head around why the writer had written the script like this, most people were uncomfortable shipping the main leads together and that’s telling. Added to that, the clear use of the damsel in distress in this drama bothered me a bit more than I’d like to admit. Ji Soo’s choice here was definitely weird.

“When I Was Most Beautiful” would’ve served better as a cautionary tale, it would’ve also been a lot better had it been about 6 episodes long with the idea focusing on how the younger brother gets over his love for his brother’s wife and moves on with his life.

I guess my biggest surprise was how poorly executed the script was, it was written by beloved screenwriter Kim Eun Sook who you probably know from hugely popular kdramas such as “The Heirs” and “Goblin.” The writing was nonsensical, incoherent and lacked the spark her dramas usually have.

The romance part was set up extremely poorly and towards the second half of the drama, things just went south real fast and you come to accept whatever the writer shoves in your face because there is no point in asking ‘why’ or ‘how.’

The cast was probably what made me sit through it, I loved Woo Do Hwan and Kim Kyung Nam’s performances. Lee Min Ho’s performance was the weakest of the lot but not entirely bad, I know he can do better.

“Backstreet Rookie” is arguably one of the most controversial kdramas of 2020, based on a very questionable webcomic that has gotten backlash for numerous reasons. The first episodes got backlash from the Korean and the international communities. “Backstreet Rookie” holds the record for the most complaints submitted for a Korean drama.

It features very odd choices, choosing to make this webcomic was already quite weird and the setup for the first episode was also surprising and in certain areas downright unacceptable.

Many international fans also criticized this drama for its portrayal of Jamaican culture, which was never addressed by SBS but the scenes featuring that said character were so unnecessary and difficult to sit through at times.

“Backstreet Rookie” also makes fun of a wife repeatedly abusing her husband psychologically and emotionally to entice laughter which was unacceptable to say the least.

What became of “Backstreet Rookie” following the backlash was a watered down version of the controversial webcomic. The screenwriter was very careful not to cause further controversy and it showed with the way the script was handled after the backlash. The main characters don’t even get into a relationship up until the last minute and dont even kiss, which made me wonder, why would you even make such a controversial drama to begin with if you wont be able to handle the backlash?

“Alice” was Joo Won’s first drama following his military discharge, too bad it was both weird and disappointing.

Time-travel dramas are generally pretty difficult to pull off, while “Alice” was off to a great start, it went downhill pretty fast, again the script that made the least sense, you could pick so many holes in it, its impossible to ignore them.

The screenwriter also thought it was a good idea for us to show how the son (Joo Won) cared deeply for his mother only to surprise us with another woman who is his in theory his mother from another universe and then alluding to their romantic involvement. That’s called incest and it doesn’t matter if she’s from a different universe. The screenwriter’s need to shove this particular love line down our throats felt so unnecessary, it could’ve been a lot better had he focused on the time travel part rather than focusing on the romantic relationship between both leads.

The main reason I watched “Hi Bye Mama!” was none other than the screenwriter who wrote one of my favorite Korean dramas in recent memory, so I walked in with high expectations only to be shocked by how repetitive it quickly became.

The idea was noble and such a tear-inducing experience but the execution was subpar. “Hi Bye Mama!” didn’t need to be 16 episodes long to tell its story, 10 or 12 episodes would’ve greatly benefited the drama. Stretching a script beyond its capacity hindered the drama and it quickly lost its charm. The characters oddly act/react dumb to situations and delay certain reveals for no obvious reason, petty happenings are created to add substance to the plot without providing much to the narrative in question.

The characters talk repeatedly about the issues over and over again until it becomes annoyingly repetitive.

Probably one of the dramas that shocked me the most with how boring it was, “Chocolate” was cringy most of the time and featured some of the most repetitive overly used kdrama cliches for a 2020 kdrama, and that’s telling. Its basically like a book of stereotypes and cliches all kdrama screenwriters use when needed.

Its my least favorite Ha Ji Won drama in recent memory. The performances felt dull at times not at the fault of the actors but rather the screenwriter who has been writing for a long time. Its the type of kdrama that would’ve exploded in popularity in 2007.

The characters were so typical, the damsel in distress who’s too kind despite going through hell that needs a saving by a man who disrespects her and humiliates her on multiple occasions only to end up later falling for her, as if his trauma or past experiences should ever excuse his actions.

It was disappointing to me because I was shocked by just how typical it turned out to be.

“Unique! Chef Moon” marked Eric’s comeback for the first time in a while, so I was admittingly excited. Imagine my surprise seeing the premiere which can only be described as something straight out of a 15 year old imagination coming to life. At times, it felt like the screenwriter wasn’t even taking this seriously.

The whole tone felt very comical and I don’t think the screenwriter intended for it to be like that, Eric plays yet again the hot competent jerk male lead and its getting tiring watching him re-play the same character over and over again.

“Unique! Chef Moon” had one of the most disappointing scripts of a kdrama I had seen in recent years, not only for 2020.

So these are my picks for the most disappointing 2020 Korean dramas, what about you guys? What were your least fav kdramas of 2020?