“The Uncanny Counter” Had The Best And Most Heartwarming Ending Ever, here is why- Episode 16 Recap And Review 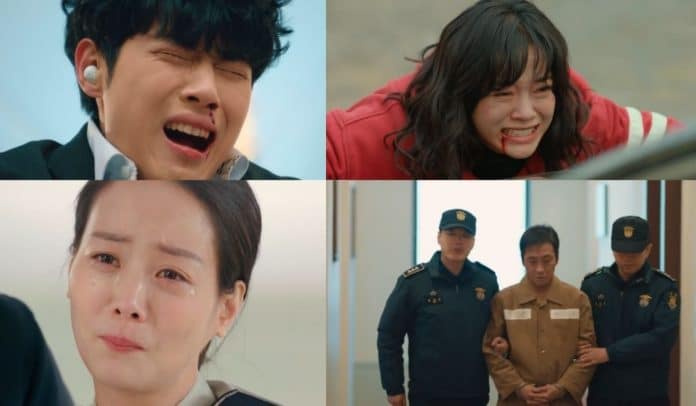 “The Uncanny Counter” Had The Best And Most Heartwarming Ending Ever, here is why- Episode 16 Recap And Review

“The Uncanny Counter” has wrapped up its run earlier today and it has gone out with a bang.

The hit OCN drama will return soon, don’t worry, since it’s been renewed for a second season.

The episode begins with the team going against Mayor Shin. Unbeknownst to them, he’s gotten stronger and begins to overpower them, he hurts everyone and the team is severely hurt.

After he knocks out his team and severely injure them, So Mun stands up after getting beaten and is able to manipulate the surrounding objects, they begin to fly at his command and he begins hitting the evil soul with the objects, he ends up overpowering him and begins to extract the evil soul, however, Mayor Shin has prepared one last surprise, he’s kidnapped So Mun’s grandparents and a moving truck is heading in the direction of the car that won’t open, the team gets up and go to stop the two cars from colliding, which puts So Mun in a difficult position, the evil spirit says he’s the only one able to stop using the psychokinetic powers from killing his grandparents.

So Mun refuses to budge and ends up summoning the evil spirit, at one moment, his mom appears in disguise in front of him, he breaks down and almost backs out, his team keeps encouraging him to complete it saying this isn’t his mom and its an illusion the evil spirit is using to distract and kill him. So Mun successfully drags out the evil spirit.

He meets Wi Gen in the gate to the afterlife and there, they meet the personification of the evil spirit, Wi Gen hands him over to the authorities and banishes him, he vows this isn’t over and that there will always be evil, he says,

‘This fight will go on forever. Your cursed fate will lead to a painful death and everyone around you will also die like that because of you,’

‘I don’t care even if this is only the beginning, until the day there isn’t a single evil spirit left, I will keep fighting.’

In the real world, the mayor slips back into a coma but Choi Jang Mul promises to do his best so he can wake up and receive the proper punishment for his crimes.

The souls of the people the evil spirit has captured have been freed and everyone awaits their fate. So Mun goes to meet his parents, at first, Wi Gen introduces him as the student who saved them, as they’re about to go have tea with Wi Gen to process what they’ve been told about being entrapped for 7 years, the mom looks back and recognizes So Mun.

they cry hugging each other, So Mun says what he’s always wanted to say, he admits that he used to believe his parents died that day because he lied about losing his homework, he wanted to see them more but now that it’s been resolved, is it okay for him not to think it was all his fault, his parents cry with him and assure him he’s not at fault.

The team brings So Mun back to his place, he’s happily smiling while sleeping catching up with his parents. Meanwhile, the team also gets to meet their partner Cheoljung whom they have lost at first. They catch up with each other over noodles.

The next day, Mo Tak hands in the audio evidence to the police officer who used to work with his girlfriend, he also says he’s not returning to the police force. The young detective is astonished by how many people Shin Myeong Whi has killed to cover up his crimes.

Back at the police station, Noh Hang Gyu is falsely admitting to murdering Kim Yeong Nim in front of Cho Tae Sin, the police explain that his younger brother has been murdered. He throws a fit and picks a fight with Cho Tae Sin who claims he had no idea he’d died.

Mo Tak then goes to meet Jang Hye Kyeong who used to work under Shin Myeong Whi, in another twist, turns out she’s the one who has evidence that connects him to the murder of her best friend and she’s been feeling immense guilt for it. Mo Tak convinces her to hand in the video evidence she has because her friend’s crime is the only one they can’t properly pin on Shin Myeong Whi. She agrees and turns herself in as well.

Shin Myeong Whi wakes up eventually and is charged by police. Mo Tak also anonymously sends in tip that exposes him for murdering So Mun’s parents in a TV broadcast.

So Mun’s grandparents end up finding out through the broadcast and cry themselves to sleep. So the next day, So Mun asks Ha Na for help. She meets his parents and asks them if they have something to say to them. She ends up delivering the message to the grandparents.

Choi Jang Mul takes Mae Ok on a date. She’s acknowledging they’re going on one. Meanwhile, Mo Tak asks Ha Na if she’s ok and if she has it all sorted out. She then looks back on her memories with her family and says she’ll never understand or accept what they’ve done but for that brief moment she saw them, she was happy.

At school, Hyeok U gathers the kids to apologize to them, he also apologizes to So Mun and his friends, he’s dropping out of school.

At the trial of Shin Myeong Whi, the recording of him ordering So Mun’s parents to be killed is played, he admits to having ordered the hit and is sentenced to life in prison. After the trial ends, he meets So Mun outside, So Mun says he won’t ever forgive him for what he’s done and that he’s proud of his parents who died trying to catch him.

The Spirits Immigration Office decides to sign them to catch spirits around the country; they’re against the idea at first but end up accepting it.

They continue to catch criminals. Choi Jang Mul then surprises them with new outfits designed to better suit them. They continue to fight off evil spirits with their new upgrade.

What did you guys think of “The Uncanny Counter” ending? did you like it?